Last December we became aware that the owner of 136 Lyndhurst Ave. had applied for a demolition permit. [See Demolition Permit for 136 Lyndhurst Ave. Under Review].  This house is one of ONLY 63 in the whole Casa Loma neighbourhood identified in the Heritage Conservation District (HCD) Study of 2017-18 that should be evaluated for inclusion in the Casa Loma Heritage Conservation District. 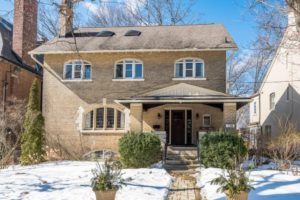 The CLRA therefore tried to negotiate with the owners to maintain the front façade and porch of the building (or at least the key elements).  The CLRA had in fact notified our Councillor Josh Matlow and also officials in the City of Toronto Heritage Preservation Services department earlier in the year as soon as this property was listed for sale.  We also alerted the listing real estate agent that this property had been identified within the Casa Loma Heritage Conservation District Study.  Josh passionately tried to protect this house from demolition by organizing a face to face meeting between the CLRA and the owner and his architect where it became clear that they were fully aware of the HCD study and its recommendations.   Notwithstanding this they also made it clear that they appreciated the heritage and special nature of our Casa Loma neighbourhood but were still absolutely determined to demolish and replace this unique heritage home with a contemporary structure, inconsistent with the heritage character of the home and other homes on Lyndhurst  – one of the gateway streets to Casa Loma.

At the Toronto and East York Community Council meeting on February 5th which dealt with the demolition application Councillor Matlow vigorously defended the historical nature of our neighbourhood and won council support that no demolition permit would be issued before the issuance of a building permit.

The CLRA retained Joan Burt, architect and registered heritage specialist, on the recommendation of the Annex Residents Association.   Joan’s Report endorsed the heritage merits of this home and its contribution to the heritage character of the Casa Loma neighbourhood.  The home is a good example of the Arts and Crafts style because of its elegant porch and unique arched windows with leaded glass surrounded by flamboyant stone work and the brick . 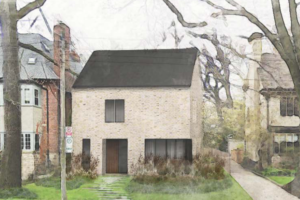 As the owners are not seeking any variances (same footprint and coverage), no Committee of Adjustment meeting is required paving the way for the issue of a building permit for the proposed 3 storey structure. (third floor windows will be visible in the rear).

The building permit and demolition permit were subsequently issued on March 16, 2020.

The CLRA is extremely concerned about the waste of taxpayer dollars by the City’s Heritage Preservation Services department and the extreme inefficiencies and lack of coordination between City departments.  Here we had a very public process where the neighbourhood was identified as one of VERY FEW heritage neighbourhoods in our City worthy of protection given its unique history and architectural contribution to the entire City of Toronto.  Significant tax payer dollars and time and effort by CLRA volunteers were spent on the Casa Loma HCD Study over 2017 and 2018, and nothing has happened since it was completed in July 2018.   This study provided a clear blueprint and public process which included the identification of certain areas to be protected as a whole and certain important individual properties that contributed significantly as well.   Yet even when all of this information, including our own heritage architect’s opinion and our own heritage research that the CLRA undertook which immediately identified the significance of this property and the context of the adjacent properties including a home at 134 Lyndhurst designed by Eden Smith one of Toronto’s most significant period architects (also the architect of Wychwood library).

The CLRA will continue to press forward to see the HCD Study brought to its full implementation before more damage is done to the historical characteristics of our unique and special neighbourhood.   We are waiting on further meetings with Councillor Matlow and the Heritage staff before other properties important to the contextual characteristics of our neighbourhood are lost to the wrecking ball.

We are not against contemporary architecture at all – we are against the destruction of significant heritage structures where the streetscape is forever altered and lost when the owners know they are buying properties within these heritage neighbourhoods.   We point to 72 Wells Hill as an example of maintaining the key elements of a heritage structure on a heritage street while the owner was able to build a completely new contemporary home that met their needs.   There is a group of owners who believe that they are entitled to build contemporary houses or oversize houses without any regard to the impact of the streetscape, immediate neighbours or the overall character of the neighbourhood.   We point to 20 Wells Hill where again the CLRA had to rally and invest significant financial and volunteer resources to prevent a complete disaster on Wells Hill.  There the owners were intent on skirting all discussions or feedback from neighbours and the neighborhood to build their contemporary home in a way that it would stick out and block the front façade of the immediate neighbor to the south and destroy a unique heritage private park developed as part of the predominant Garden City movement.  Although the new home does not suit the historical character of the street, the CLRA succeeded in having the home maintain the original setback.

The CLRA was also extremely disappointed to learn that our paid City staff officials within the Heritage Preservation Services department – who are charged with protecting heritage in our City and provided with significant taxpayer dollars to do so – were completely ineffective and unwilling to step up and completely failed to fulfill their mission and only end up causing confusion and conflict between departments and citizens.   The official in this case refused to help in seeking a delay in the issuing of a demolition permit where they could have easily sought to study the homes and the general grouping that had already been identified within the HCD study commissioned by their own hired consultants.   The city planner refused to address the recommendations in the Casa Loma HCD Study which identified 136 Lyndhurst along with the adjacent and nearby properties at 134, 133, 128,125, 120, 117 and 111 Lyndhurst among 63 properties identified as contributing factors to the creation of the Casa Loma Heritage Conservation District that should be evaluated for inclusion in the HCD.

This situation together with an unsatisfactory outcome for 20 Wells Hill avenue point to an urgent need to repair this broken process which is not only failing to accomplish what it was supposed to do but causing unnecessary conflict and dissension between citizens.