The Gypsy Moth is evident again this year in our neighbourhood. 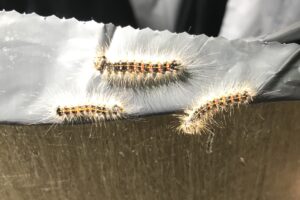 The CLRA brought this to the attention of the City and learned there are no plans for spraying our neighbourhood this year.  The last spraying took place in June 2019.  Private arrangements with arborists are the only way to go this year.

Joel Harrison, a Forest Health Care Inspector with the City went through the Casa Loma area this week and saw some remnants of the Gypsy Moth population from 2019, but  he considered it still relatively low when compared to what is going on in some other parts of the city and the province.

We can’t ever eliminate Gypsy Moth, we can only hope to try to keep numbers low enough to reduce the damage that can happen to sensitive trees like oak.  There is no aerial spraying planned for this year but it isn’t too late to hire private tree companies to spray private trees if you feel it necessary.  For that you’d have until about mid-June.

Attached is a PDF guide with some other techniques that residents can do yearly to help reduce gypsy moth.

If you go to the City’s website:  www.toronto.ca/gypsymoth  then you can also drop points as to where you are seeing caterpillars and/or potential problems through this online reporting tool.  The City will use this data to delineate its surveys for Gypsy Moth eggs in the fall. This helps the City determine if populations are rising and if intervention is required.

The Box Tree Moth was detected in Toronto in August 2018.  In November 2018, the Canadian Food Inspection Agency (CFIA) confirmed the presence of box tree moth in an urban neighbourhood in Toronto. This is the first confirmed report of this pest in North America.  Damage to boxwood plants is caused by the larvae (caterpillars) feeding primarily on leaves and sometimes on the bark.  Infested plants are disfigured by the loss of leaves and by the webbing spun by the larvae.  Younger larvae feed by eating the lower surfaces of the leaves only, leaving the upper epidermis intact.  Older larvae feed inside the webbing and skeletonize the leaves, leaving only the midribs, and occasionally the outer margin intact.  Neighbours have had success treating these caterpillars with BTK.  Larvae are most susceptible to BTK when they are in the early developmental stages.  BTK has no known toxic effects on humans, other mammals, plants, birds, fish, or honeybees or other beneficial insects.  It is available at places like Home Hardware and Sheridan Nurseries.