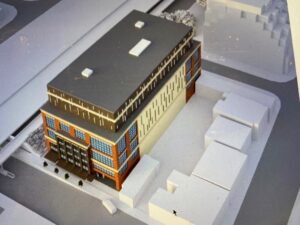 The CLRA has prepared a critique of the proposed 9 storey self-storage building proposed for the lands centered where the coin wash is located on Bathurst St. just north of Dupont (1109 Bathurst St.). We are concerned that it will discourage, if not sterilize, the whole front part of Dupont in that area and the streets surrounding it from future residential intensification. This will be Canada’s tallest self-storage building upon completion. Raising 9 storeys and encompassing 160,000 sq. ft.

Some points raised in our critique:

The CLRA has been engaged with residents on Austin Crescent and Lyndhurst Court as well as the Tarragon Residents Association and the Annex Residents Association to take our concerns to Councillors Matlow and Layton before the Application is submitted to the Toronto & East York Council. The CLRA critique can be obtained HERE. Documents filed with the City related to the application can be accessed HERE.

This first Project Position Statement – prepared after the Project Review Meeting on 9 March, 2021, will be updated as the City processes the development application. This Statement, and the views expressed in it, are presented by ARA ‘without prejudice’ to any legal actions arising in the course of the City’s review and possible appeals.

The development application by Talus is for a nine-storey self storage facility on the northern part of the block between Dupont and the CPR line, and Bathurst and Albany. The application is for a Zoning Bylaw Amendment and Site Plan Approval. An Official Plan Amendment (OPA) is not necessary as it conforms to the OPA arising from the Dupont Visioning Study in which ARA was heavily involved.

Since the Dupont study and resulting OPA and Zoning Bylaws did not anticipate any free-standing facilities in the General Employment Area stretching 20 m south of the railway corridor, the applicant is asking to amend the zoning to: 1) extend the General Employment Area designation 10.5 m south into the Mixed Use zone abutting Dupont (their site stretches ~30 m south from the corridor boundary); and 2) extend the height limit of the southern Mixed Use zone to the rail corridor boundary to allow for a 9-storey (~35 m) building. The proposed building will have an entrance off Bathurst Street and an exit onto Albany Street.

The project site is immediately to the west of the nine-storey Bianca condominium under construction and immediately south of the CP Rail Corridor.

The site is subject to the 2016 mediated Ontario Municipal Board settlement on Official Plan Amendment (OPA) through a Site and Area Specific Policy (SASP) for the north side of Dupont between Kendall and Ossington, resulting from the Dupont Visioning Study that ARA spearheaded in 2011. This Planning Context has a major bearing on ARA’s positions on projects along Dupont as it supported the mediated settlement. 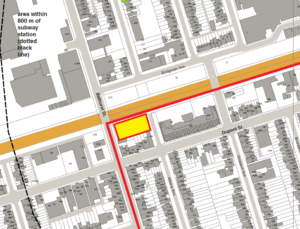 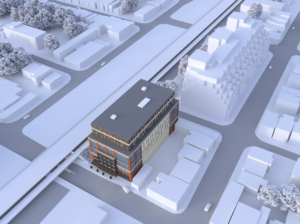 The proposed building will curtail the future development of the southern part of the block since the developer is allowed to build up to the southern lot line with no setback requirement.

The proposed building will have a negative impact on views from residential areas to the north as it will present as a massive form with minimal surface articulation. The proposed building will also have a negative impact on those using the planned Green Line as it will cast shadows on the linear park and could be experienced as a menacing blank wall.

Also, there is concern about reflected noise to the north.

As part of our environmental commitment, the ARA would like to support alternative modes of transportation, particularly for short trips. We would like the new Self Storage facility to prioritize bike, e-bikes, and bike trailers as preferred transportation vehicles for customers and act as an anchor to provide the community with e-bikes for community renting or borrowing.

ARA recommends that (1) the building be reduced to six storeys (including mechanical) and (2) the south elevation step back above the first floor.

In written comments, Planning (Jason Tsang) has suggested that the building height be reduced to eight storeys – or more – and that there be step backs on the north and south elevations. Although these are positive suggestions, height remains an issue and the need for a step back above the first floor on the south elevation remains to be addressed.

Site Plan Control has not yet been formally addressed, although some suggestions have been made. SPC will proceed after the rezoning is decided at TEYCC; P+D has asked that the community be consulted in the Site Plan review process.

To comment on this interim Project Position Statement, please email David Sisam, Member of ARA’s Planning and Development Committee, at: .

Clearing of Leaves by Road Operations