May 8, 2020 / CLRA / Comments Off on Proposed High-rise Development on Montclair Ave.

We received the following message from the South Forest Hill Residents Association.

As concerned residents of South Forest Hill we are contacting you with important information about a high-rise development proposed for the south side of Montclair Avenue, west of Spadina. 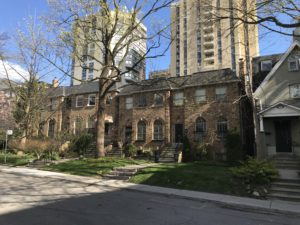 Here is what we know to date:

1.   Fifteen single and semi-detached homes on the south side of Montclair (63-91) were bought by a developer, Parallax Development Corporation for between 2 to 4 million dollars each. The residents will live rent-free for two years. The sale

is scheduled to go through on June 4, 2020.
2.   The developer is also seeking to purchase Bantry Avenue (the laneway between Montclair and Heath) from the City.
3.   The City planners reported that the developer is proposing to build two towers of 23 and 21 storeys respectively with a five storey podium and a setback. The development will also include some townhouses.
4.   This development is proposed for the narrow dead-end portion of Montclair that is adjacent to Lower Village Gate.
5.   The developer is represented by Bousfields Inc., a company that does “planning, design and engagement”.
6.   Bousfields has had 2 meetings with the City’s Planning Department and has met with our Councillor, Josh Matlow.
7.   No formal development application materials have been submitted yet.
8.   The SFHRA has retained a lawyer and has started working with the resident leadership in some of the buildings directly impacted by the proposed development. This is the same lawyer who worked successfully with the Association to modify the development on the North West corner of Montclair.

Why you need to be concerned:
1.   It appears the proposed development is out of proportion to the area in which it is proposed.
2.   The street is a small residential dead end with no egress except onto Spadina.
3.   The City already approved a six- storey building for the corner of Montclair and Spadina in addition to the three-story high townhouse development on the East side of Montclair.
4.   There may be great impact on the surrounding existing buildings with regard to traffic, sunlight, shadowing, noise and infrastructure.
5.   The impact may be particularly felt by the local community- especially from Lonsdale to the North and Heath to the South, the homes east off of Spadina and west to Bathurst as well as all surrounding areas including Lower Village Gate and Village Terraces.
6.   If approved, this type of development would set a precedent for further large developments in the Village.

The South Forest Hill Residents Association is asking for your participation and support.
You may contact the SFHRA at to lend your support and volunteer to join the effort to ensure that this development is scaled back to reduce undesirable impacts and so that it doesn’t drastically change the nature of the neighbourhood.