The CLRA organized a meeting with Casa Loma Management (Pat Di Donato and George Briggs) on Friday September 20th to review this summer’s activities at the castle and for an update on the forthcoming Legends of Horror month.  Slavisa Mijatovic from Councillor Matlow’s office and officers from the City’s By-law Enforcement Department attended as well.  We were informed that Chris Papadopoulos who was our regular contact at the castle recently left for a new opportunity in Montreal.

It was noted that there were fewer complaints about noise from the castle this summer from our residents.  Management reported that attendance seems to have leveled out between 800-1000 and there were no nights like last year where the castle reached capacity.  Events in the Pavillion will stop at the end of September.  There was also an improvement in traffic flow as Uber and taxi drivers are getting more used to the designated pick-up/drop-off area in the east parking lot, including this designation now in the Uber app.  Use of the south entrance at the corner of Davenport and Walmer was explored but it was decided that the pathway from that entrance has safety issues.  There was no progress on the reconfiguration of the visitor’s parking lot as it is still being used in part as a staging area for equipment and materials being used for the reconstruction of the Stable wall.  This work is expected to be finished by this fall.  We were told that the design of the parking lot would not allow for collection of fees on exit and that the option of self-serving parking payment machines was still under study.   Removing the traffic bottleneck caused by collecting payment on entry remains one of our priorities and has been supported by the TMMP study.  [Note we are still waiting on the next TMMP report which we expect before year-end].  There has also been no progress in bringing public transit options to the front page of the Casa Loma website.  Pat Di Donato took note of this.  Note was also made by the by-law enforcement officers of the ice cream truck with its loud generator which parks well beyond the one hour parking limit on Walmer Rd.

The Legends of Horror event will take place between September 27th and October 31st this year except for September 30, October 1, October 7 & October 8.  Like in previous years the last timed entry will be at 11 PM with exit after Midnight. 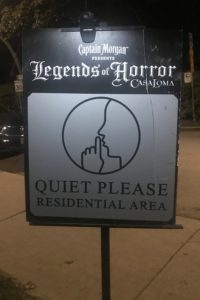 A security guard has been hired to move people along as they exit the stables to Walmer Rd.  We have asked that the last timed entry be no later than 10 PM next year. Casa Loma has a number of security people on sight and are working to improve their training on crowd and traffic management.  There has been a problem in relying on Paid Duty police officers as they do not always respond to job postings and sometimes commit and do not show up.  We again asked our Councillor’s office to secure regular police presence, like other major public facilities that attract large crowds, especially where alcohol is involved.  We expect a follow-up on this matter but as the police department does not report to City Council, it may take some time.

There was no update on the Stables lease negotiations. Both Casa Loma and our Councillor’s Office know of the CLRA’s interest in being kept informed.  We want to have input into any expansion of the Stables use.

The CLRA welcomes comments and suggestions from area residents affected by noise, traffic and parking issues related to Casa Loma.  We are currently working with residents on Walmer Rd. to determine what changes residents may want to the On-Street Permit Parking times.  [Walmer Rd. Survey.]

Please direct your comments and suggestions to