The Casa Loma Residents Association (CLRA) maintains the opposition it filed in February 2019 to the application made to the City’s Committee of Adjustment for a minor variance to convert 105 Wells Hill Ave. into a private daycare.  The application has been submitted again and will be heard on February 12th *.  The CLRA urges all residents of the Casa Loma neighbourhood to voice their opposition to the application by writing to Sylvia Mullaste at the City of Toronto at , with a copy to your City Councillor, Josh Matlow, at and to the CLRA at .

105 Wells Hill Ave. is the first house on Wells Hill Ave. south of St. Clair Ave. W., which sits on the dangerous and blind curve between Melgund Rd. and St. Clair Ave. W. across form Wells Hill Park. This heavily driven two-way section of Wells Hill Ave was recently narrowed by 1.5 meters following completion of a new sidewalk on the east side (the inside of the curve).  It is the only access road to our neighbourhood from St. Clair Ave. westbound and is used extensively by through traffic to and from Bathurst Street (particularly during rush hours and busy times at Loblaws).

The daycare is intended to serve 37 children and operate with a support staff of 9.  Many residents of the Casa Loma neighbourhood have already expressed the obvious safety concerns with children being dropped off at the proposed daycare and the congestion that will result from cars backing out of the driveway at 105 Wells Hill Ave. or stopping on this curve leading either from or towards St. Clair Ave.

The narrowness of the street combined with the sight line limitations in front of the proposed daycare—which are exacerbated by the fact that the plots of land on the inside of the curve, (including the proposed daycare itself) are elevated above the street—will inevitably lead to increased risk of danger to children, parents, residents, and those who commute via Wells Hill Ave. 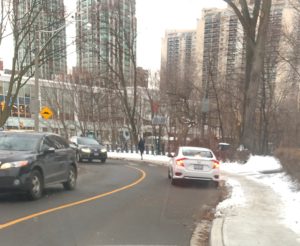 The reality is that just one (1) car stopped on the Avenue for any period of time creates an unacceptable hazard for the operation of a daycare. To date since the road was reopened after completion of the sidewalk, the new “No Standing” signs along the Avenue have not deterred vehicles from parking on the curve and causing danger and congestion.

The CLRA is a supporter of more day care facilities to service our neighbourhood.  In fact, the CLRA strongly supports the 49-child public day care to be built in the platform of the proposed development at Bathurst and St. Clair.  However, 105 Wells Hill Avenue is simply an inappropriate and unacceptable location for a daycare.

The CLRA will be requesting that the Committee of Adjustment reject the application or, in the alternative, defer consideration of the application until the City’s Transportation Services department has had the opportunity to properly study the impacts and potential hazards of this proposed daycare.

For more information about the application, refer to the City of Toronto’s online Application Information Centre relating to this application at:
http://app.toronto.ca/AIC/index.do?folderRsn=1exZJYEU09A08cV1s0%2BloA%3D%3D