On February 15th the City released its Proposed Changes to Sir Winston Churchill Park Dogs Off-Leash Area and Tennis Courts.   A local group of dog owners led by Hilton Avenue resident, Laura William, is campaigning for improvements to the proposed dogs off-leash area. The new area will replace the one in Sir Winston Churchill Park that was closed in 2016 to allow for the rehabilitation of the St. Clair water reservoir beneath the park. The City is proposing a relocation of the DOLA approximately 125m below the reservoir to the south west. 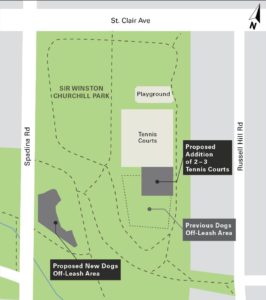 The new dog park will be less than half the size of the old one. It’s worth noting that the pre-existing dog park was an extremely busy one, frequently operating at or near capacity. Further, its surface will be pea gravel which is not the best surface for dogs’ paws, is a problem for people who may have stability issues and has been the subject of complaints at other DOLAs in the city.

The dog owners group is looking to have the city increase the size of the off-leash area by extending it under the Spadina bridge and up the slope to the street entrance from Spadina Road, mid-way up the reservoir to make the park fully accessible. Further, they want the city to employ a different surface such as wood chips used at Cedarvale Park’s off-leash area.

A Formal Complaint has been registered with Toronto Parks, Forestry and Recreation and Toronto Water and a request has been made for effective community consultation before a final decision is made.

A meeting was held in Councillor Josh Matlow’s office on Feb. 20th to apprise him of their concerns. A subsequent meeting is scheduled for February 28th. The dog park is scheduled to open before the end of this year.

Residents may express their support by contacting Laura William at .