A Heritage Conservation District (HCD) Study for the Casa Loma neighbourhood was prioritized by the City of Toronto in March 2015. Research, analysis, evaluation and consultation is nearing completion. Ultimately it will be determined if an HCD designation will be an appropriate planning tool for our neighbourhood. The City Planning Division has scheduled a second Open House where you can learn about the HCD study, ask questions and share your comments:

The City Planning Division retained a Project Team led by EVOQ Architecture with ASI Inc. (archaeology), Urban Strategies Inc. (planning) and DTAH (landscape architects) to prepare the HCD Study report. The Project Team presented their draft recommendations to the Casa Loma Community Advisory Group on May 10, 2018 and will be presenting it to the area residents at the Open House on June 20th.

The Project Team has proposed that two streets in the Casa Loma study area be granted HCD designation: Hilton Avenue, and Wells Hill Avenue. These two streets retain a high degree of integrity as representative examples of early 20th century residential development in the city of Toronto.

Properties within the proposed Hilton Avenue and Wells Hill Avenue HCDs were individually evaluated to determine whether they contribute to the neighbourhood’s heritage value.

Contributing properties (shown in blue on the map) are those that have design, historic and/or associative value and that contribute to the neighbourhood’s heritage character. Properties were identified as contributing if they satisfied the following criteria:

The Casa Loma Residents Association is reviewing the Project Team recommendation and is considering a submission that the whole neighbourhood should be included in the HCD designation.

Through the course of the built form and landscape survey, community consultation and historic research, the Project Team has identified a number of individual properties within the study area that warrant further research to determine whether they merit inclusion on the City’s Heritage Register. 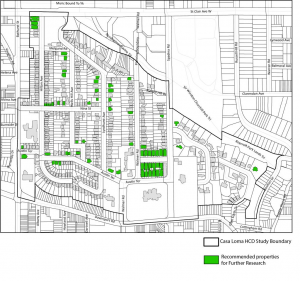 These properties will be reviewed by Heritage Preservation Services against the Criteria for Determining Cultural Heritage Value or Interest (Ontario Regulation 9/06) in 2019. These properties are identified in green on the map.

It is important that residents attend the Open House on June 20th to learn more, question the Consultants on their recommendation, meet City staff and provide your input. Any comments you would like to make to the Casa Loma Residents Association should be emailed to .

The HCD Study report and an accompanying staff report will be presented to the Toronto Preservation Board on July 12th.